The History of Wedding Cake: Its Origins and Symbolism 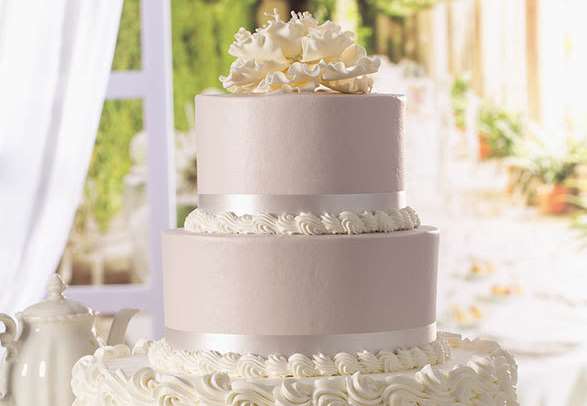 For many, the most elegant part of the reception is the wedding cake. Especially as it is a way for the couple to express themselves with a unique and beautiful element that takes center stage amidst the various food offerings. But there is much more to the wedding cake than merely being the edible showstopper.

While today’s couples have certainly put their own spin on the type of wedding cake(s) they serve, there are quite a few traditions and wedding lore involving the wedding cake.

The wedding cake has been a part of the ceremony since the ancient Greeks and Romans. As part of the nuptials, the groom broke bread over the bride’s head. This was to symbolize her submission, the end of her purity, and to represent good luck and fertility.

During the Middle Ages, a new take on wedding cake began. The newer approach included cakes that were high-stacked and the newlyweds would kiss over it. If they were successful in kissing without knocking the cake over, then it was believed that they would be blessed with many children.

Taking the goal of the bride’s fertility a step further, the English decided that child-bearing would be best increased by throwing the cake at the bride.

The Icing on the Cake

Originally wedding cakes were not the iced confections of today. In fact, they were often plain and similar to today’s fruitcakes. However, by the 17th century and on into the 18th, sugar started to be more affordable, and white icing began being used as -not surprisingly- a symbol of the bride’s virginity as well as an indicator of the wealth of the bride’s family.  Later on, having color added to the icing, as well as having tiered cakes and elaborate designs indicated even greater affluence and social status. The symbolism of the couple feeding each other is to show others that they promise to look out for each other forever.

Originally, the wedding cake was intended to be passed out to wedding guests by only the bride in order to ensure fertility. However, as weddings began to be larger events this became a task for both the bride and groom. In time, the cake cutting ceremony began. The symbolism is that the hand of the groom is placed over that of the bride’s, to show his support and as a promise to take care of her and their future.  The couple was encouraged to cut from the bottom tier, as a reminder of the relationship’s longevity. As for the attendees, having cake after it has been cut by the couple is believed to bring good luck.

So, whether you choose to have a single wedding cake, a plethora of cupcakes or perhaps a variety of cakes served at your wedding, now you know why that delightfully decorated item is important. If you have questions regarding your cake, the display, how it can be served, or any other thoughts regarding your reception, be sure to talk to the Gala Events Facility team. We will be happy to answer all your wedding ceremony and reception questions so that your big day can be everything you have dreamed about. Contact us today.